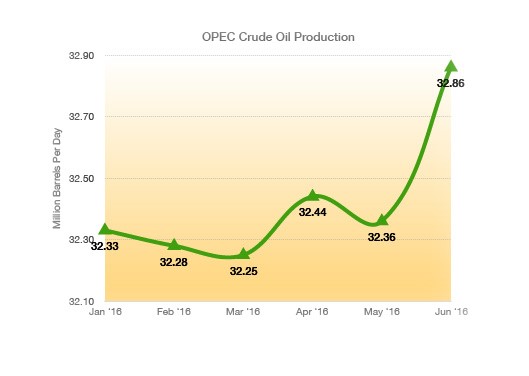 As oil prices rebounded throughout May and June, drillers revived idle rigs at the prospect of catching higher prices as they evolved. Unfortunately, the upswing in production and drilling was accompanied by growing supplies and less consumption, thus resulting in a supply glut.

As a group, OPEC represents the world’s largest producer of oil, with Saudi Arabia being the single largest producer at over 10 million barrels per day, roughly a third of total OPEC production.

The striking declines in price just in July are a testament to the commodity’s unpredictability, subject to supply and demand dynamics worldwide. Yet even with such an efficient market, as claimed by Saudi Arabia, producers have a propensity to misjudge what the actual demand might be. Some oil analysts believe that OPEC leaders, specifically Saudi Arabia, may have ramped up production knowing that additional demand was not yet there.

A non-routine meeting has been set for late September in Algeria has been seen as a precursor to production level changes. Non-OPEC member Russia, the world’s largest oil producer, is set to attend the meeting and could announce moves to help stabilize oil prices. Low oil prices have created a precarious situation for those countries that primarily rely on oil to keep their economies intact.

Crude oil prices traded as high as $107 per barrel as recently as June 2014 but pulled back to near $40 in early August.

We do expect the oil prices to remain somewhat volatile, but we can see an upward trend as the supply shrinks to allow demand to catch up.  With that we should see some mild increases at the pump by next spring and summer.