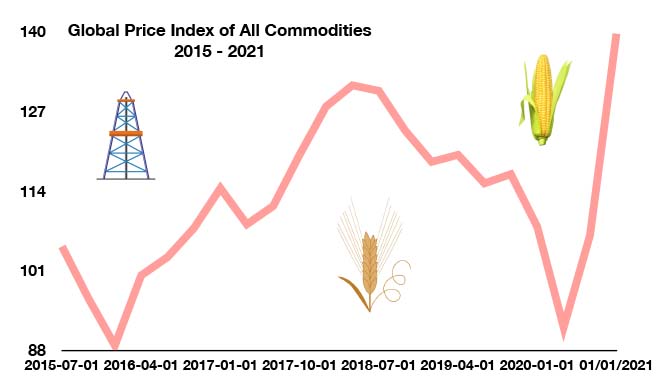 Last year’s Federal Government stimulus package was credited with helping both individuals and business weather a mandated shut down.  However, the continued efforts to throw money at the waning crisis appear a bit short sighted as we take a closer look at the effort of a possible fourth stimulus package and the beginning of tax increases to pay for all of them.

Inflationary pressures have taken hold throughout the economy, as raw materials required for most every consumer product from bread to automobiles have increased in cost due to short supply and growing demand. Commodities such as wheat, copper, corn, lumber and steel are essential for the production and manufacture of consumer products, whose rising costs are being passed along to consumers in the form of higher prices.

Markets reacted to proposals by the administration aimed at raising capital gains taxes as well as widening the reach of estate taxes. Small business owners are also expected to be affected. Many analysts and economists believe that markets will tolerate a tax increase without any significant pullbacks.

The proposed tax hikes by the administration are primarily targeted at those earning $400,000 and by raising the top rate on ordinary income from 37% to 39.6%. Capital gains would be taxed as ordinary income for taxpayers earning more than $1 million. Wealth transfer is expected to become more costly as estate taxes and exclusions on home appreciation are also a focus.

The Commerce Department reported that the U.S. economy grew at an annual rate of 6.4% in the first quarter.  Concurrently, the Federal Reserve commented that the economy is heading into a period of faster growth and job creation, yet still remains vulnerable to a spike in COVID variant cases should it occur.

Companies continue to struggle in finding workers for posted positions with nearly 7.5 million jobs unfilled. Economists believe that some workers have been deterred by generous state and federally funded unemployment benefits.

Projections by the International Monetary Fund (IMF) place global growth at an annualized rate of 6% this year, as pent-up demand drives growth globally. The IMF also emphasized the risk of virus mutations outpacing vaccinations allowing the virus to become resistant to the vaccines being used.

Census data released by the Census Bureau for 2020 revealed a U.S. population growth of 7.4% since the last Census in 2010, with a total of 331,449,281 U.S. residents as of April 1, 2020. The Census results also shifted state representation in the House of Representatives with states such as California and New York losing seats while Texas and Florida gained seats.

A semiconductor shortage is hindering production of automobiles to mobile phones worldwide, creating a demand for used cars and inflating consumer prices. Concurrently, rising commodity prices are affecting food producers, which are passing along the elevated costs in the form of higher prices to consumers.